XAU/USD drops beneath $1930 on better-than-expected US PMIs


Gold price struggles to continue its rally after hitting a new 9-month high at $1,942.51, retreats to the $1,930s area, as Wall Street prepares to open on a lower note. Factors like a risk-off impulse, and the greenback erasing earlier losses, weighs on the XAU/USD. Therefore, the XAU/USD exchanges hands at $1,928.39.

Risk aversion is underpinning the US Dollar

The US cash equity market is poised for a lower open. The XAU/USD main driver so far in the day has been the American Dollar (USD), which, according to the US Dollar Index (DXY), which tracks the buck’s value vs. a basket of six currencies, is bottoming around 102.000, and so far is up 0.13%, at 102.150. Contrarily, US Treasury bond yields, namely the 10-year benchmark note rate, which usually influences Gold’s price, are unchanged at 3.532%.

US S&P Global PMIs were better than expected, weighing on Gold’s price

The US economic docket featured January’s PMIs, revealed by S&P Global, with the Services PMI coming at 46.6 vs. 44.7 expected, while Manufacturing rose by 46.8 vs. estimates of 46.2. The S&P Global Composite, which measures both indices, increased by 46.6, higher than the foreseen 45 figure. Even though US business activity remains in contractionary territory, the downward trend moderated.

“The worry is that, not only has the survey indicated a downturn in economic activity at the start of the year, but the rate of input cost inflation has accelerated into the new year, linked in part to upward wage pressures, which could encourage a further aggressive tightening of Fed policy despite rising recession risks,” Chris Williamson, a chief business economist at S&P Global Market Intelligence, said in a statement.

After the release of US data, the XAU/USD continues to extend its losses towards the $1,920 region.

Aside from this, the US Federal Reserve (Fed) would feature its first monetary policy meeting from January 31 – February 1, in which the US Central Bank is estimated to hike rates by 25 bps, which would lift the Federal Funds rate (FFR) at the 4.50% – 4.75% range. The CME FedWatch Tool, odds for a 25 bps hike are 96.6%, with eight days ahead. For the March meeting, traders expect the Fed to raise rates to the 4.75% – 5.00% range. The slowdown in interest rate increases was spurred by inflation tempering in December, after the core Consumer Price Index (CPI) edged towards 5.7%, after peaking in September of 2022 at 6.6%.

From a technical perspective, the XAU/USD daily chart suggests that the yellow metal uptrend remains unchanged. The ongoing pullback toward the $1,920 area could be a respite for XAU’s bulls after the Relative Strength Index (RSI) reached overbought conditions. Once the RSI exits from the oversold area, that would be the reason to resume the uptrend. Therefore, the XAU/USD first resistance would be $1,950, followed by the $2,000 mark. As an alternate scenario, if Gold struggles, its next support would be $1,900, followed by the 20-day Exponential Moving Average (EMA) at $1,883.75. 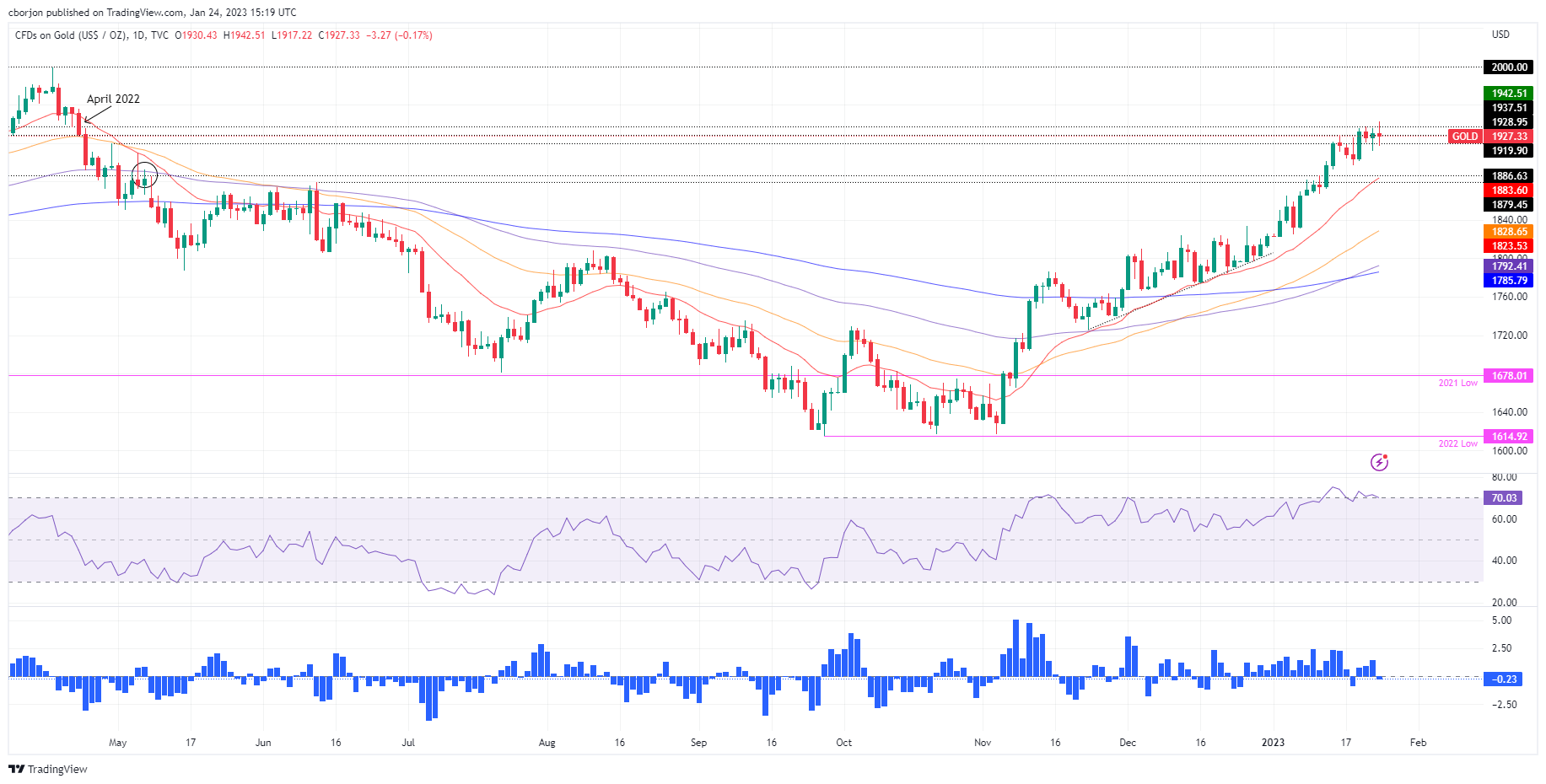 Read More:XAU/USD drops beneath $1930 on better-than-expected US PMIs

NAS100 Cautious Ahead of High-Profile Earnings

Ethereum Price Continues To Surge As It Nears Profit-Taking Region

Dovish BoC Guidance Would Drive US And Canadian Dollar Losses