In contrast to the euro zone’s apparent revival in business activity in January, flash PMI (purchasing managers’ index) readings from the U.K. Tuesday showed the economy contracted at its sharpest rate in two years.

The S&P Global composite U.K. PMI, which encompasses services and manufacturing, slid to 47.8 in January from 49.0 in December, falling short of a 48.5 consensus forecast in a Wall Street Journal poll of economists.

The S&P Global euro zone composite PMI, which encompasses manufacturing and services activity, came in at 50.2 in January, up from 49.3 in December and ahead of a consensus forecast of 49.8.

The index exceeded the 50 mark, which separates expansion from contraction, for the first time since June.

The euro zone’s dominant services sector index rose to 50.7 from 49.8 in December, while the manufacturing index improved to 48.8 from 47.8, also surpassing forecasts but remaining in contractionary territory.

Stocks on the move: Topdanmark up 3%, Ambu down 4%

Danish stocks were the biggest movers in both directions at Tuesday’s open.

Insurance company Topdanmark added 3.7% to lead the Stoxx 600 after its fourth-quarter earnings report and dividend proposal, while hospital equipment maker Ambu fell 4.6% after SEB cut the stock to “sell” from “hold.” 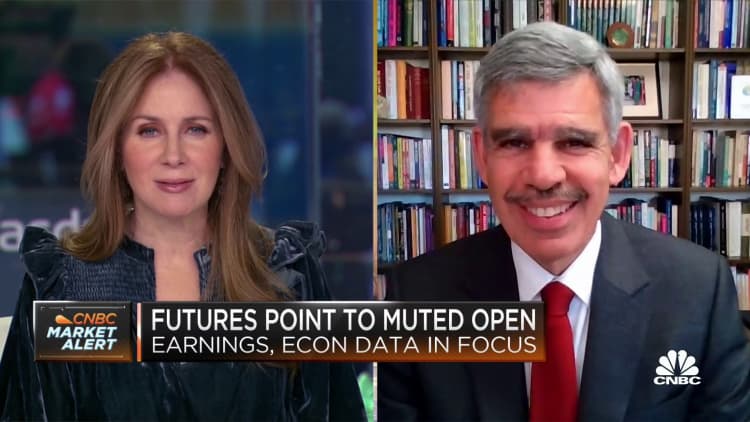 Surging inflation may appear largely in the past, but a shift to a 25 basis point hike at the next Federal Reserve policy meeting is a “mistake,” according to Allianz Chief Economic Adviser Mohamed El-Erian.

Inflation, he said, has shifted from the goods to the services sector, but could very well resurge if energy prices rise as China reopens.

El-Erian expects inflation to plateau around 4%. This, he said, will put the Fed in a difficult position as to whether they should continue crushing the economy to reach 2%, or promise that level in the future and hope investors can tolerate a steady 3% to 4% nearer term.

“That’s probably the best outcome,” he said of the latter.

After more than 2 years of regulatory crackdowns and a pandemic-induced slump, Chinese tech names are back on Wall Street’s radar, with one stock in particular standing out as a top pick for many.

Fed likely to discuss next week when to halt hikes, Journal report says

Federal Reserve officials next week are almost certain to approve another deceleration in interest rate hikes while also discussing when to stop the increases altogether, according to a Wall Street Journal report.

The rate-setting Federal Open Market Committee is set to convene Jan. 31-Feb. 1, with markets pricing in almost a 100% chance of a quarter-point increase in the central bank’s benchmark rate. Most prominently, Fed Governor Christopher Waller said Friday he sees a 0.25 percentage point increase as the preferred move for the upcoming meeting.

However, Waller said he doesn’t think the Fed is done tightening yet, and several other central bankers in recent days have backed up that notion.

The Journal report, citing public statements from policymakers, said slowing the pace of hikes could provide the chance to assess what impact the increases so far are having on the economy. A series of rate hikes begun in March 2022 has resulted in increases of 4.25 percentage points.

Market pricing is currently indicating quarter-point hikes at the next two meetings, a period of no action, and then up to a half-point reduction by the end of 2023, according to CME Group data.

European markets are heading for a positive open Tuesday ahead of flash PMI (purchasing managers’ index) data for the euro zone in January.

There are no major earnings releases Tuesday.

Why is crypto pumping? Watch The Market Report live

Morning Bid: It’s all about the weather

New suppliers race to plug in to electric car market