The Company is highly encouraged by the results to date. Drilling continues to extend the deposit east and west of the historical drilling as indicated on the longitudinal sections Figures 3 and 4 below (see also news releases dated September 30, 2022, October 13, 2022 and November 3, 2022). Figure 1 below illustrates how the surface projection of the deposit has expanded significantly relative to the projection of the historical resources. Joaquin Merino, P.Geo., President of Emerita, notes: “Given the increasing dimensions of the lenses in longitudinal section and plan, we anticipate an increase in tonnes relative to the historical calculation. Keep in mind, not all of the massive sulphide will be above the cut off grade so no direct comparison can be made until we complete the drill program and model the deposit. However, drills are now targeting a very important area of the deposit that hosts some of the thickest and highest grade sections based on the historical drilling and much of this area was not assayed for gold. Presently, there are approximately 60 additional drill holes between the core shack and the assay labs with results pending.” 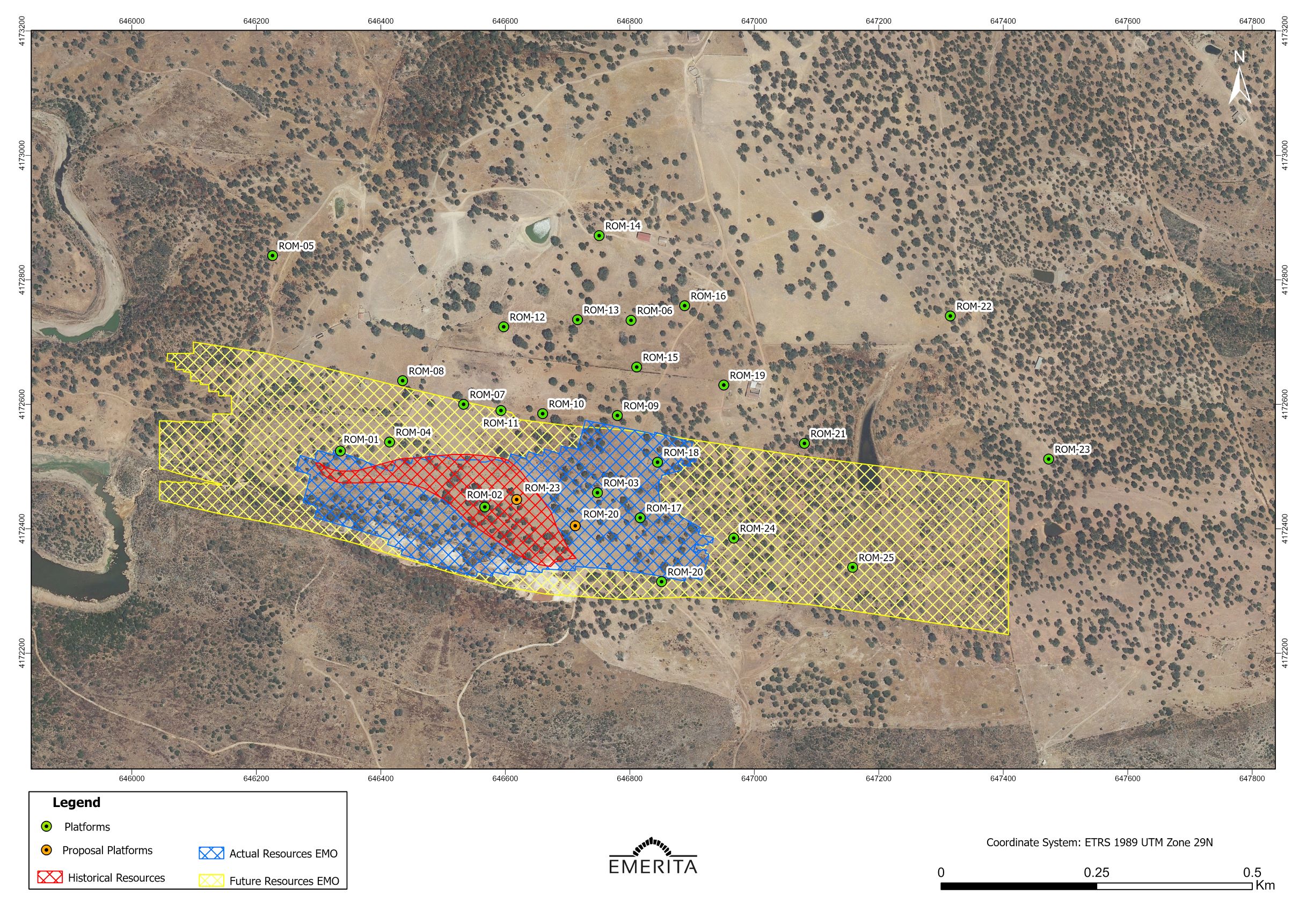 Figure 1: Plan map showing the projection to surface of the historical La Romanera deposit in red, the outline of the surface projection based on Emerita’s drilling to date in blue and the projection of the conductive plate from the geophysical survey in yellow. The deposit remains open along strike and at depth. As illustrated on the longitudinal sections below, the extent of the massive sulphide deposits has been expanded, although as with the historic estimate, a portion of the massive sulphide is low grade and will fall below cut-off grades. 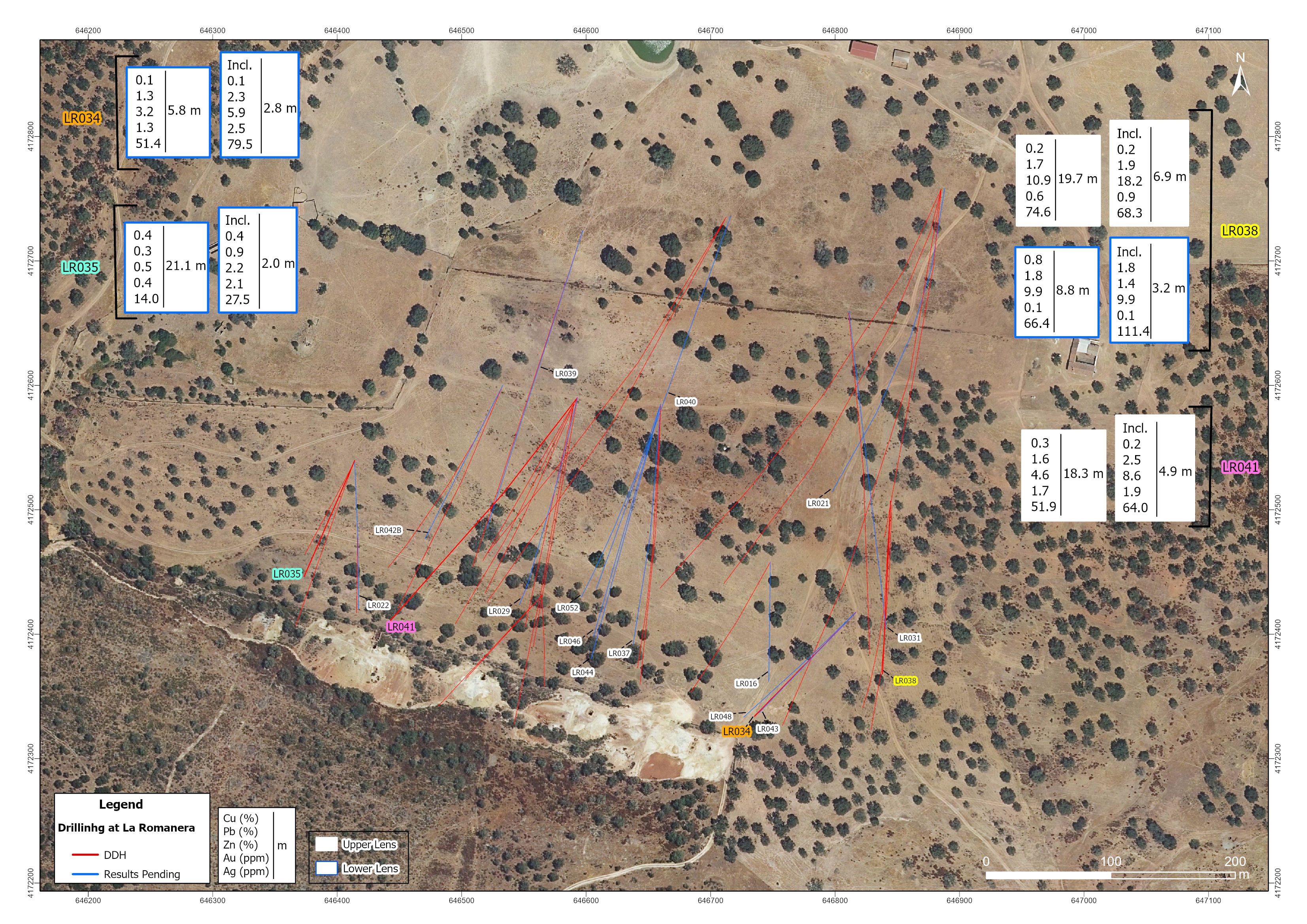 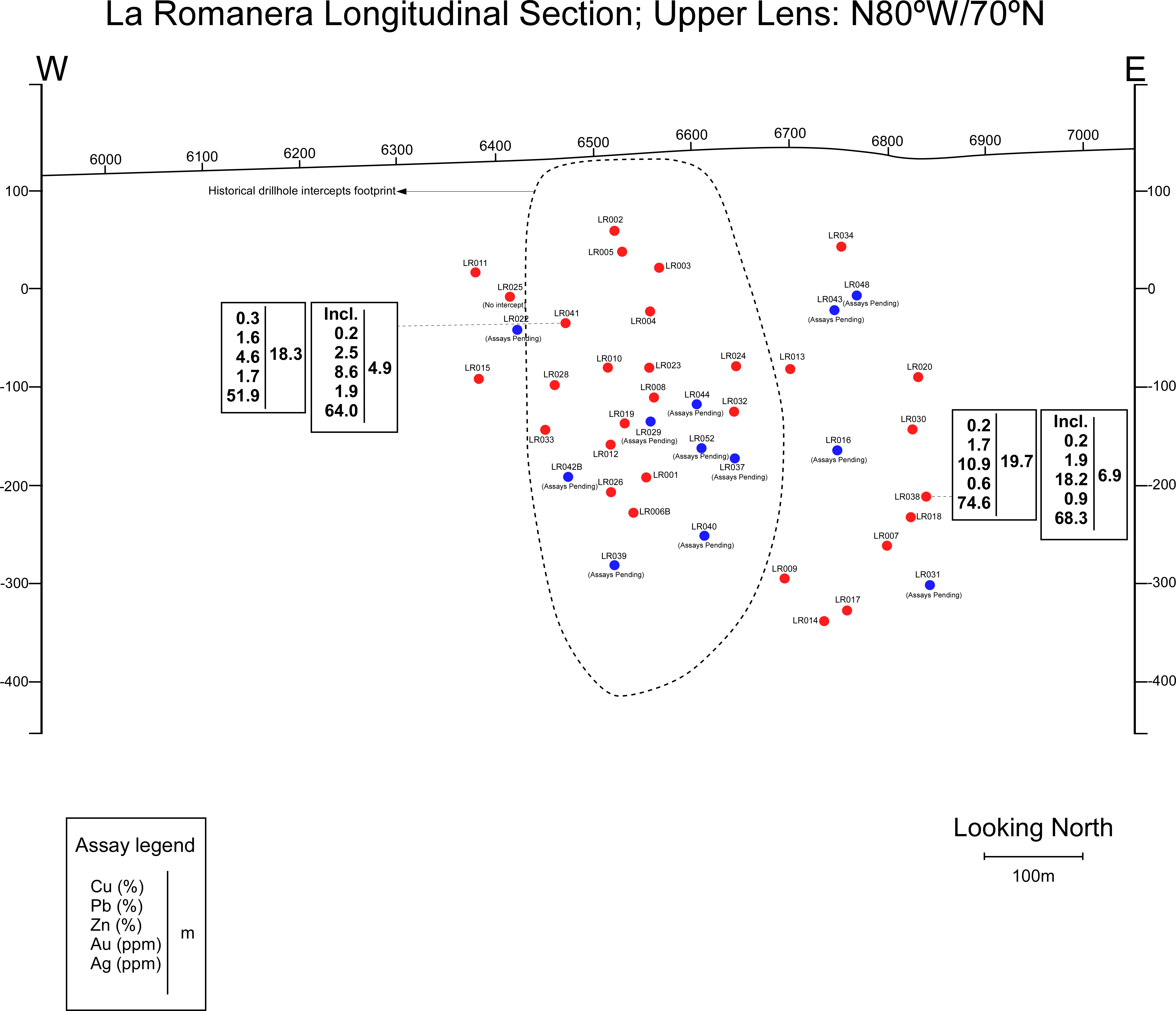 Figure 3: Vertical Longitudinal projection of the Upper Lens at the La Romanera Deposit. Note drill hole LR038 approximately 150 m east of the outline representing the limit of the historical drill hole data base. 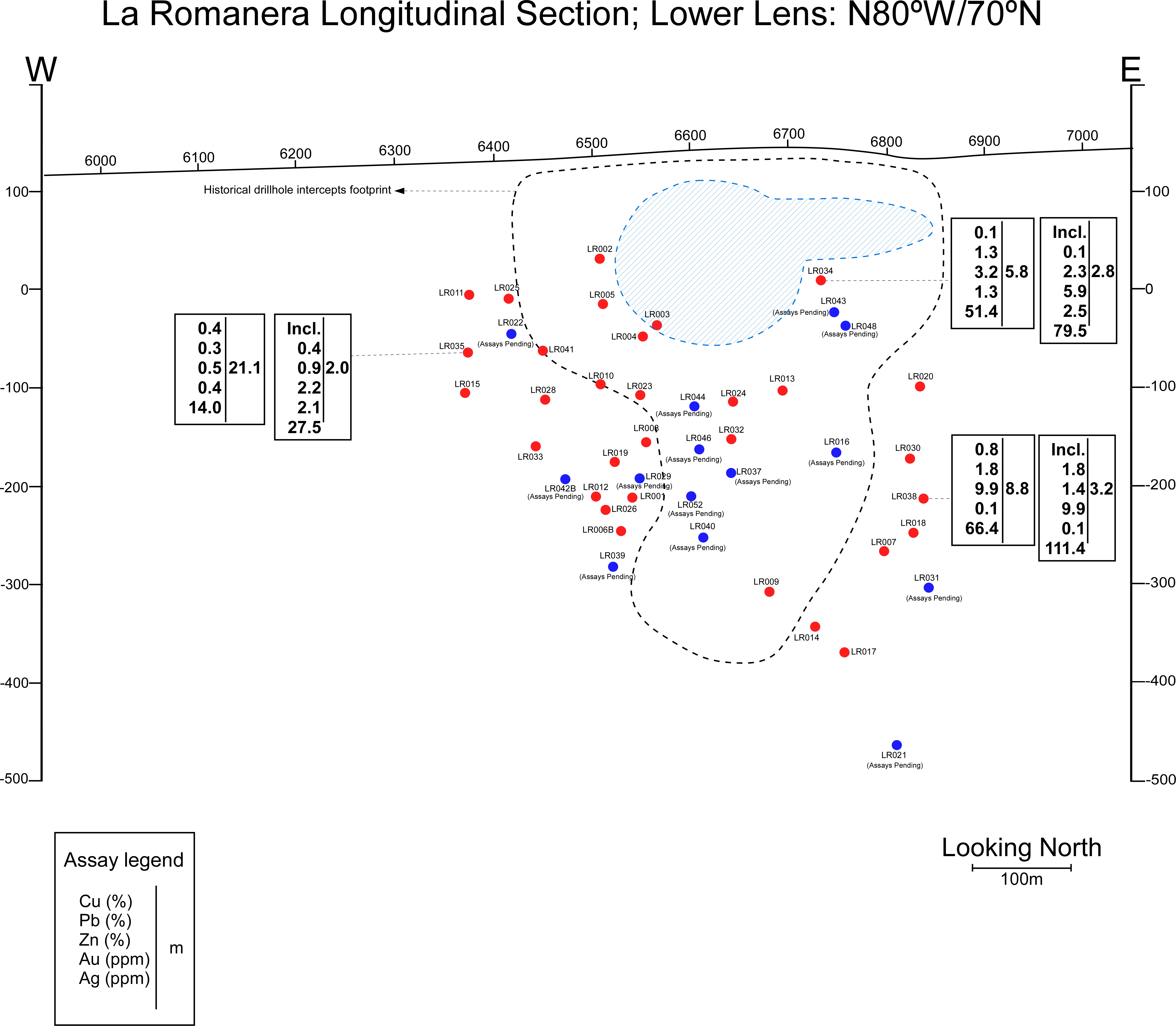 Figure 4: Vertical Longitudinal projection of the Lower Lens at La Romanera Deposit. The blue ovals indicate the extensive area where historical drilling indicates thicker mineralization and higher grades relative to the averages for the deposit at that time. Much of this area had no gold assays. Emerita is commencing the delineation of this portion of the deposit presently.

Drilling at La Romanera is HQ size and core is placed into core trays at the drill site and transported directly from the site to Emerita’s coreshack (15KM) from La Romanera and (8KM) from La Infanta. Once the cores are received at Emerita’s coreshack they are photographed and geotechnical logging is performed. Geological, mineralogical and structural logging follows and mineralized zones are identified. The samples are marked every 1m or less, and respecting lithological contacts, with most of the samples 1.0m long. The zone immediately above and below the mineralized zones are also sampled. Core samples are sawed in half and half of the core is returned to the core tray for future reference. Once the core samples are cut, bagged and tagged, they are shipped to the ALS laboratory in Seville by Emerita personnel where sample preparation is done. In Seville, ALS performs the mechanical preparation of the samples and then the pulps are sent to ALS Ireland (ICP) and ALS Romania (fire assay). The analysis at ALS Lab corresponds to the ME-ICPore (19 elements) package, together with the Au-AA23 fire assay (Gold). ALS is independent of Emerita.

10% of the analyzed samples correspond to control samples (fine blanks, coarse blanks, high, medium and low grade standards). In addition, 10% of pulps are reanalyzed at a second independent certified laboratory (AGQ Lab Sevilla). When the analysis is completed, the certificates are received from the laboratory and the QA/QC protocol identifies any deviation or anomaly in the results and the entire batch is re-assayed in such case. Once the data is approved by the QA/QC protocol assays are entered digitally directly into the database.

The scientific and technical information in this news release has been reviewed and approved by Mr. Joaquin Merino, P.Geo, President of the Company and a Qualified Person as defined by NI 43-101 of the Canadian Securities Administrators.

A qualified person, as defined in National Instrument 43-101, has not done sufficient work on behalf of Emerita to classify the historical estimate reported above as current mineral resources or mineral…

Cryptocurrency market is ‘most mature’ in these 2 countries, new Huobi report reveals